Usually described as an hybrid between apples and pears, quinces are actually a very different fruit. The quince tree belongs to the same botanic family of apple trees and pear trees, the Rosacea, it is however classified as a different genus, namely the Cydonia.

The fruits bearing from this kind of plants are big, with an irregular form and they are highly fragrant. Quinces have a very long story and for a long time people prefer not to eat these fruits because of their sour taste, even when they are ripe. Anyway, over the years people use this fruit in many different ways: as freshener or as useful ingredients for healing decoctions, and finally for some very famous preparations such as mostarda and quince jelly.

History of quinces: which are their origins and where they come from?

Quinces come from the quince tree, one of the oldest known fruit trees. It seems that the Babylonians and the Greeks used to cultivate this trees, which spread all over Asia Minor and Caucasus until the Mediterranean Countries, among which there was also Italy.

However, quinces are certainly not included in the list of the most produced fruits. It’s easy to believe if you know that only one hundred hectares in the entire Italian territory are dedicated to the quince trees cultivation. Lombardy and Veneto have some areas highly populated with quince trees. In particular in the region nearby Treviso there is a wide area with very old spontaneous quince trees. 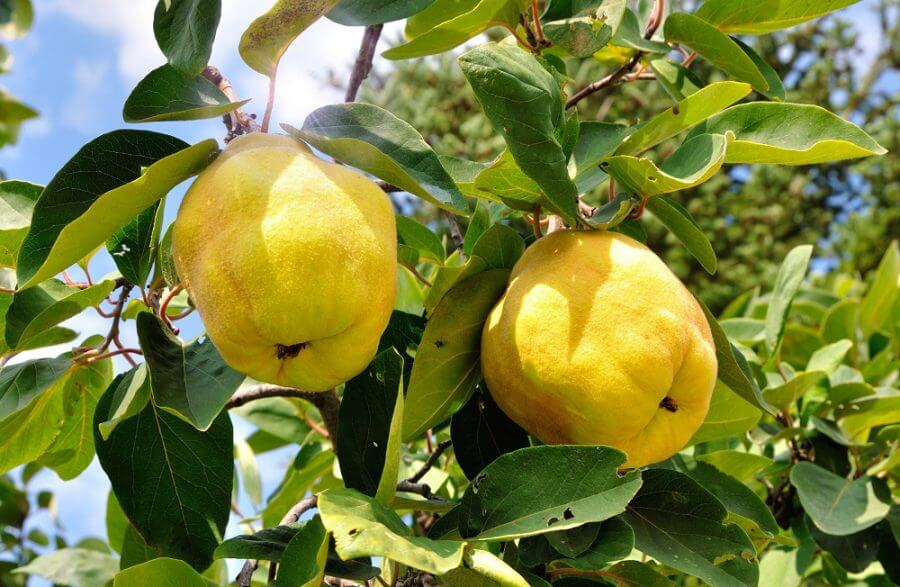 We can found evidences of these ancient origins of quince trees among the Italian territory also in the names of some towns, since their names clearly come from Cotogno, which means “quince tree” in Italian, namely Codognè, near Treviso and Codogno near Lodi.

Known since ancient times, quinces have been not eaten for a long time, but used for other purposes. The peasant families used to employ them as freshener for their wardrobes, bur little by little they started to use them to prepare some tasty jams. The tradition was handed until the present time. Nowadays quinces are not eaten as a raw fruit, but they are very appreciated for the preparation of preserves, mostarda and jams instead.

Legends about quinces, worshipped by the ancient cultures

Even though these fruits were not used a lot in cooking, quinces had a very good reputation among ancient cultures because of their properties. Many different legends are linked to these peculiar fruits.

Back in Greek times quinces were appreciated for their smell and we can recognize quinces in the mythological representations among the fruits exchanged by the gods. According to some testimonies of the ancient authors, the fruits offered to the gods in Sparta, had a gentle smell, but they were not so good to eat: this reminds us of raw quinces.

Among the testimonies coming from the ancient times, some of them tell about the use of quinces as healing remedies. From the Middle Age until the Renaissance, doctors suggested to drink the juice of quinces as treatment for intestinal diseases.

How do we eat quinces nowadays?

We have said that, since the ancient times, quinces are not edible raw because of their bitter taste. Well then: how quinces can be used in cooking? To balance the tartness of this fruit it is recommended to cook them with water and sugar: after that you can try plenty of recipes and preparations, cakes and different kind of desserts. 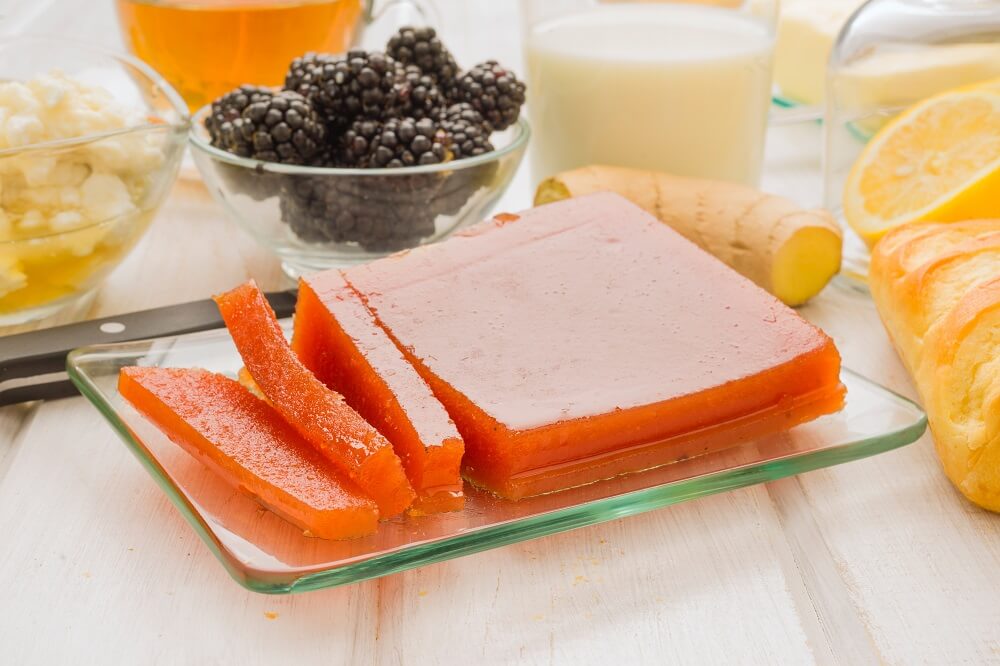 Quinces are mainly used to prepare preserves and jams: not just the classic quince jelly or mostarda, because these fruits – naturally rich in pectin – are often used to prepare other kind of preserves. Pectin is actually a natural setting agent and thanks to its properties fruits can last longer. The ancient recipe of mostarda takes advantage of this benefit, since it was conceived to preserve fruits for long periods.

Here we are, finally describing how to use quinces in cooking: which recipes can we prepare with these smelling fruits? They are mostly used to prepare some refined desserts: sugar normally sweets the natural tartness of these fruits, enhancing their taste and their smell. Here below you can find some ideas to enrich your menus with quinces!

Quince jelly is the most classic dessert made with quinces: its preparation is long and elaborate, if you want to follow the traditional recipe. Its preparation method is the same as the one used to prepare a classic fruit jam, but quince jelly also needs a drying process, which may last from two to three weeks. After that jelly quince is ready to be taste.

Among the most recommended recipes in order to serve an original dessert with quinces, we propose you to prepare some baked quinces. It is a very easy preparation: cut the fruits in half and put them on a baking tray with sugar, red wine and cloves. When fully cooked, serve them with vanilla ice cream. 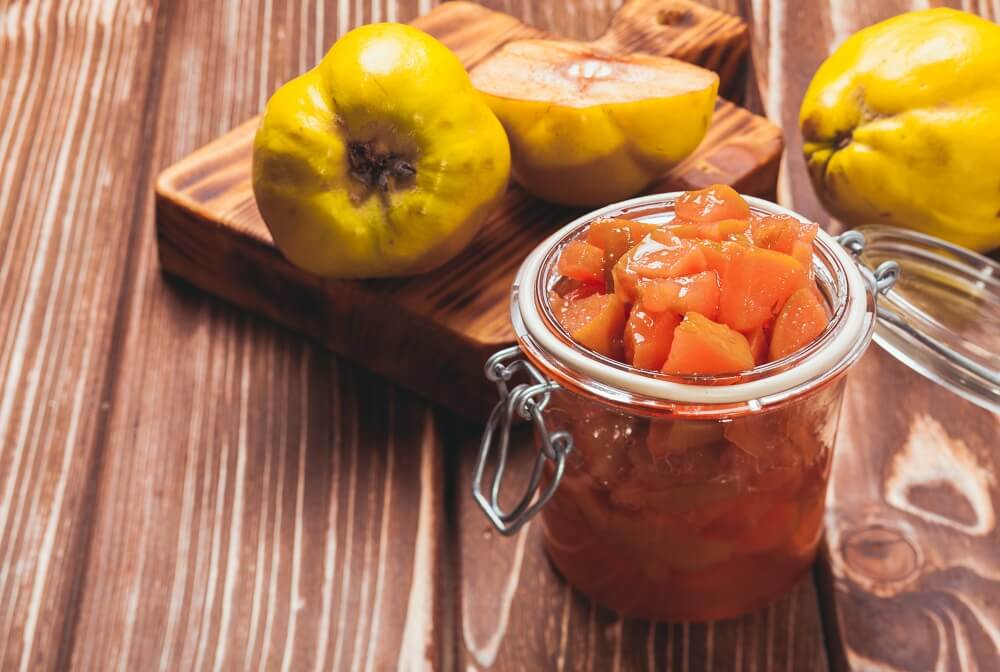 Instead of baking a classic apple cake you can choose to use quinces. You just need to prepare the smooth and traditional dough, adding small pieces of quinces previously cooked with lemon juice and sugar.

Not only desserts:  quinces may be used to prepare an excellent spirit with digestive properties. The first step consists in grating the fruits pulp, which needs to work for a couple of days. Then extract the juice and add alcohol (1 l.) and sugar (500 g.). Depending on anyone’s taste, quince liqueur may be flavored with a few cloves or a pinch of cinnamon. That’s when the process of maceration begins. After  3 months, strain the mixture and the sweet digestive liqueur will be ready to be drink.

Quinces are some very particular fruits, and there are a lot of fun facts to discover about them, such as: